Today's Top Stories
1
45 V Cute and Trendy Spring Wedding Guest Dresses
2
Hot Chocolate Upgrades Could? Change? Your? Life?
3
Okay, When Can We Watch ‘Killing Eve’ Season 4?
4
How You Can Help the People of Ukraine
5
Microfiber Towels Are the Key to Perfect Hair 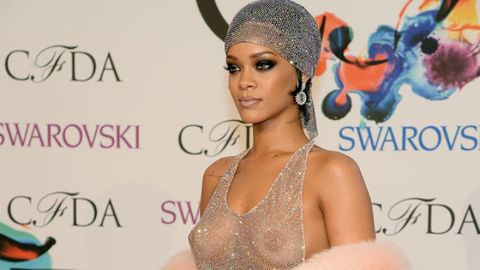 The event is like the Oscars of fashion — all the fashion people get together and celebrate each other by giving out statues — and mostly attended by models, designers, and other people who make, wear, and are simply accustomed to bizarre, wearable things, so the pressure is really on for everyone to look weird but also glamorous. Rihanna was there to claim the "fashion icon" award, and wore an outfit that somehow consisted of nothing but also ... everything. Here, questions that shall keep humanity from working, eating, or sleeping until answers reveal themselves.

1. Did she have her nipple rings in? She normally has them in. We know this because you can frequently see them through her clothes, which are quite often see-through and worn without a bra. Rihanna, you see, has a bra allergy, which keeps her from putting much between her breasts and the world.

3. Is it even fair to call that fabric?

4. IS KATE MIDDLETON NOW OUT OF PANTY HOSE BECAUSE IT WAS ALL USED TO MAKE RIHANNA'S NAKED SPARKLES? If Rihanna's dress hasn't scandalized the queen, that surely would.

5. Did Rihanna think about how she was going to overshadow E V E R Y O N E before she showed up? Because as soon as Rihanna showed up it was like, bye — no one else exists and should go home immediately to think about all the clothes they wore.

6. Did every actress/model/luminary there feel like hanging their head in shame and leaving as soon as Rihanna showed up because she so definitively out-fashioned all of them? And if not, did they simply stand up at attention and clap swiftly whenever she walked — nay, sashayed — past?

7. Why was her underwear bigger in the front than in the back? This seemed like no normal thong — the back was basically nonexistent while the front was at least for sure there, you know.

8. Was she holding that fur stole to cover her underwear and make it look like she was totally naked?

9. What would you call whatever it was on her arms? Gloves? Sleeves? Arm warmers? Bedazzled K-Middy tights with holes for the fingers?

10. Are her seemingly constantly exposed nipples her way of making a political statement in a post-Rihanna's Instagram account world? If Instagram doesn't want anyone to see her ta-tas, is this her way of saying, "Eff all of you, they're coming out anyway"?

11. Why did she wear anything on her arms at all? It clearly wasn't for warmth.

12. Why did she wear anything at all? They do make loose glitter. Just putting that out there.

Related:
27 Amazing Looks From the Biggest Fashion Event of the Year

Amy Odell editor Amy Odell is the editor of Cosmopolitan.com.
This content is created and maintained by a third party, and imported onto this page to help users provide their email addresses. You may be able to find more information about this and similar content at piano.io
Advertisement - Continue Reading Below
More From Style
45 V Cute and Trendy Spring Wedding Guest Dresses
72 Sweet and Thoughtful Gifts for Mom
Advertisement - Continue Reading Below
Hi, You Gotta See All These Cute Fall Bag Trends
Dip Your Toes Into These Cute Fall Shoe Trends
A Bunch of Legit Cool Gift Ideas for Teen Boys​
Channel Sporty Spice With Some Tennis Skirt ’Fits
Get a Jumpstart on the Fall 2022 Fashion Trends
Just 45 Srsly Popular Clothing Brands Worth the $$
FYI: These Are the Cutest Sunglasses on Amazon
Cute Weekender Bags That Are Vacation-Ready